Welcome to hell: Manchester United’s night to forget in Istanbul

Ahead of facing Istanbul Basaksehir on Wednesday night, we are reliving the not-so-fond memories of Manchester United's trip to Istanbul in 1993 to face Galatasaray. 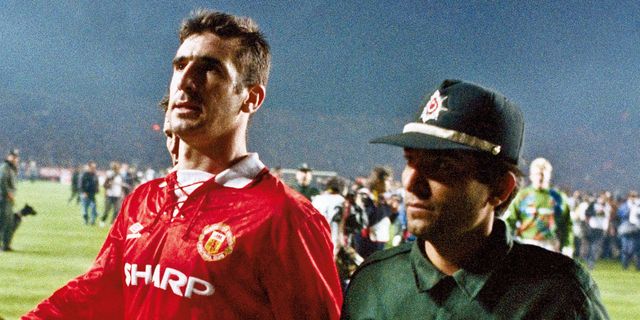 Eric Cantona being escorted out by a policeman just before the fight broke out between the Manchester United players and the police. (Image Credits: Twitter)

Ferguson was determined to win the Champions League and prove that his all-conquering Manchester United side were good enough to thrive with the best in Europe.

It all culminated in one of the greatest nights in Barcelona when Ole Gunnar Solskjaer’s outstretched right leg met the ball and Bayern Munich hopes were killed in injury-time.

It was Manchester United’s tryst with destiny but the journey to the Nou Camp was littered with heartbreaks. The Red Devils dominated the Premier League in the 1990s but regularly underperformed in Europe due to the limit placed on how many foreign players they could use in the Champions League.

And one of those heartbreaking nights was in Istanbul against Galatasaray in 1993, a night where many Manchester United players got a taste of Turkish ‘reception’.

The build-up to a tumultuous night in Istanbul

It was a night to remember for Manchester United and many of their supporters but I am not sure those memories are too fond.

Former Manchester United defender Garry Pallister wrote in his autobiography about the night and said:

“It was a terrifying business which had nothing to do with sport, and can be categorised objectively as an absolute disgrace.”

A number of Manchester United players were assaulted by the police at the end of the game; Steve Bruce was almost maimed by a flying kick and 164 Manchester United fans were thrown into jail cells without food or drink and then deported back to England for the crime of breathing oxygen.

Yet the build-up to the tie was all about Manchester United taking care of Galatasaray and progressing in the Champions League. They were cruising in the league and had a staggering 11-point lead after only 13 games.

The expectation was that despite the back-breaking foreign rule that only five overseas and assimilated players, Manchester United would be able to challenge AC Milan, Barcelona, Juventus and Monaco for the trophy.

They took care of Hungarian outfit Honved with a comfortable 5-3 aggregate and had they beaten Galatasaray, they would have made it to the quarter-finals of the Champions League.

In his brilliant book ‘Are You Watching Liverpool?’ Jim White wrote that a win over Galatasaray “was the most certain thing this side of a date with a nurse”.

The Turkish giants were an accomplished side – the spine of Bulent Korkmaz, Tugay and Hakan Sukur were also the key men of Galatasaray that ended 42 years on the sidelines of international football by qualifying for Euro 96 – yet, they were far from world-beaters.

They won the league title on the final day of the previous season and in the ten games they played in the European Cup that season, their only two victories came against Cork City.

Manchester United were favourites to win and the result looked certain when they took an early 2-0 lead in the first leg at Old Trafford. But the home side slacked and in no time Galatasaray were 3-2 ahead and they faced the prospect of a first European Cup defeat at home.

Eric Cantona scored a late equaliser but the second half was notable for Peter Schmeichel’s roughhouse treatment of a Kurdish demonstrator on the pitch.

And that state the platform and the mood for what was to come in Istanbul in the return leg.

Galatasaray’s German manager Reiner Hollmann foreboded what Manchester United would encounter in Istanbul when he said: “They will be waiting for you at the airport.”

Manchester United arrived in Turkish capital amidst hundreds of Galatasaray fans chanting at the top of their voice. “Welcome to hell”, read a banner greeting the Manchester United players.

“This is the end of the road”, read another. It was clear from the Istanbul airport that Manchester United are going to experience a night like no other away in Europe.

When asked about the ‘riot’ in the Istanbul airport when his players arrived, Sir Alex Ferguson tried to add some humour to an ominous setting and said: “You’ve obviously never seen a Glasgow wedding.”

But despite Ferguson’s attempt to temper down things, the hostility towards Manchester United was obvious in Istanbul. A bellboy at the hotel drew his finger across his throat when he saw Gary Pallister. On matchday, Turkish newspapers went on a full rant about Manchester United and English football.

When the United team went out for a look around the Ali Sami Yen Stadium, they were hit by a magnificent wall of noise from an already packed house with partisan Galatasaray fans.

Gary Neville was just 18 and he later said:

“The most incredible noise I’ve ever experienced in my life.”

The chanting was organised in such a way that the noise reverberated from one end to another. Manchester United were an incredibly hard-nosed team with the likes of Peter Schmeichel, Steve Bruce, Gary Pallister, Paul Ince, Roy Keane, Mark Hughes and Eric Cantona in amongst them.

But even they were taken aback with what they saw in Istanbul. Pallister said that, “It made Anfield look like a tea party”.

The game was a stinker. A combination of not so great pitch, Galatasaray’s man-marking and time-wasting and Manchester United’s lack of street smarts in Europe meant the Red Devils never got into any kind of momentum and created no clear cut chance.

Lee Sharpe had a goal ruled out but the best opportunities went to Gala with Schmeichel pulling off an astonishing save from Hakan.

Galatasaray made it through on away goals and deserved to do so. The match was over even before Manchester United knew what hit them.

By the end of game, Eric Cantona had lost his head. He had already booted the ball out of reserve goalkeeper Nezih Ali Bologlu and then floored him with an elbow. He could have been sent off but he was red-carded after he gave referee Kurt Rothlisberger a piece of his mind at full time.

Cantona was convinced that Rothlisberger didn’t act in good faith during the game and he was later banned from refereeing in 1997 after being found guilty of bribery.

But at that time there were far bigger problems at the Ali Sami Yen Stadium than poor refereeing. As Bryan Robson described in his autobiography, the Manchester United captain escorted Cantona off the pitch and they were accompanied by a policeman all the way to the top of the pitchside that led to the dressing rooms underneath.

“I was just about to thank the policeman when he punched Eric. Eric stumbled down a couple of steps, so I turned to throw a punch at the copper. As I did, a shield smashed into the back of me. I fell down a few steps, bashing my elbow against the wall. Eric wanted to go back up and fight, but by then the other lads were coming down the steps and calmed us down.”

Robson needed six stitches on his elbow, Paul Parker was also pushed down a few steps and he vowed never to go back to Turkey again.

The Manchester United players didn’t start it but they were not a bunch of pacifists and in the words of Steve Bruce, “We gave as good as we got.”

It didn’t end on the steps of the tunnel as Roy Keane later wrote:

“In the dressing room Eric went crazy. While the rest of us just wanted to get out of there, he was determined to go back outside to sort out the rogue cop who’d been wielding his truncheon. Eric was a big, strong lad. He was serious. He insisted he was going to kill ‘that fucker’. It took the combined efforts of the [assistant] manager, Brian Kidd, and a few of the players to restrain him. Normally I wouldn’t have backed off a fight, but even I wasn’t up for this one. There were a lot of Turks out there!”

The nightmare didn’t end with the police assaulting Manchester United players. On their way back to the hotel, the bus was bricked by Galatasaray supporters with one of them shattering the window where Bruce rested his head.

While the players were back in the hotel, the horror for the Manchester United fans was set to extend, for some over a month. Hundreds of fans were battered around the city a night before the game and many were thrown into the Bayrampasa jail, made notorious by the film Midnight Express.

One group of fans didn’t make it back to England for a month and the whole incident was covered by the Turkish authorities.

Manchester United were back in Turkey a year later where they again drew 0-0 but under very different circumstances.

They didn’t only go to hell but it was also some sort of finishing school for the nucleus of the Manchester United side that won the giant trophy six years later.

As Gary Neville, who came on for a cameo, said: “[I] learned more in 10 minutes than I had in the previous two years.”

But you’d have to foolish man to suggest the positives from the game in the Manchester United dressing room on 3rd November 1993.