The hosts face the threat of yet another series defeat to SA! But what can they do to avoid one in T20Is! 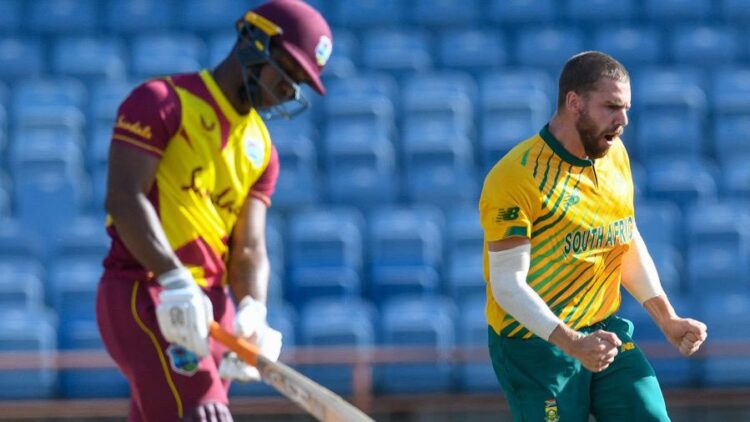 Akin to how an ace detective spots patterns in a series of murders, for instance, the usage of a particular knife, the way a body has been victimised or detecting specific modes of administering a kill, for instance, asphyxia, the ongoing West Indies versus South Africa T20 series too features a series of patterns.

Though frankly, one doesn’t need to be a detective in order to spot them. The first is that in each of the three T20Is to have taken place, the hosts, West Indies batted second, always after a target.

Second, the West Indies have been mighty poor in chasing what the Proteas set out for them to achieve save the Evin Lewis onslaught in the opening game that saved them the blues.

And third, in none of the T2os to have happened thus far, were the West Indies set an astronomically high target, 168 being the highest ask put forth by the Proteas in the last T20.

Not satisfied as yet?

Where the West Indies’ bowling is concerned, which, much to the sweet delight of home fans proved successful in restricting the South Africans, did after all falter in one key area.

It’s an aspect of the game where you simply cannot afford to be complacent. In the 2nd and 3rd T20Is, the Windies bowlers bowled 19 and 16 extras, respectively.

To anyone who thinks that isn’t an awful lot either doesn’t understand the sport or is living under a rock.

Moreover, from the games that have happened so far, the West Indies happened to have bowled a total of 41 extras. Doing the math suggests, they’ve delivered 14 free runs per game on average.

There are vastly superior limited-overs sides that deliver far lesser freebies in 50-over cricket.

So even if your batsmen aren’t challenged with a mighty score in the end, every single run distributed freely is going to hurt. And more so in the case where you end up losing a contest, as did the West Indies in the 3rd T20 international by a single run.

For starters, therefore, if the West Indies are to win tonight, which would be extremely difficult- but not impossible- since it is them under pressure, not South Africa (bubbling with confidence), the bowlers have to tick all the right boxes.

The mighty impressive Obed McCoy, who seems to have borrowed a leaf from the Dwayne Bravo school of bowling slow, bowled 4 wides on his own in the previous T20 international.

Just imagine the outcome for his team if he would’ve bowled only 3?

But that is no excuse for the insipid performance the team has shown so far. What should give them a reason to engage in serious self-examination is the fact that a batting order comprising Gayle, Russell, Pooran, Holder, captain Pollard himself hasn’t been able to chase down a target that was never even a 170 in the end.

Moreover, Pollard, the man with over 500 T20 games on his resume and a majestic record of hitting six back-to-back sixes just recently this year has failed to fire with the bat, thus failing also to lead by an example.

It honestly doesn’t help the team’s cause when it’s captain, easily one of the most dangerous hitters of all time collects scores of 1 in both the Second and the Third T20 international. All that a giant of T20 cricket lasted for in the middle have been six deliveries so far.

Does that convey something?

That Gayle was absent in the last game but faltered immediately after an impressive 32 off 24 shows that even the Universe Boss isn’t enjoying the best of runs.

Not much can be blamed on the rising young force named Fabian Allen, whose strike rate in excess of 283 courtesy a 12-ball-34 (2nd T20), offered entertainment when the big guns misfired. The only thing, however, that must be said is that young Allen would be much better off in leaving deliveries going down the leg side instead of getting into an uncomfortable position with the deliveries whisking from between his legs.

And though he opened his account in the series with a mega 93-metre six and that too, against Rabada, Andre Russell has been half the man in West Indian colours than he is, almost every time for the Kolkata Knight Riders. Scores of 25 and 5 are never going to help especially with your team in danger of losing out.

Does he need to improve his game against spin? Correct answers won’t get any awards from Muscle Russell.

And last but not the least, a run-a-ball score is never going to help your cause even if you score the most runs in the order. An out-of-form Pooran’s 27 may have suggested that runs were finally coming, but not at the strike rate the West Indies would’ve liked.

The the team, so far, have simply fizzled out against Shamsi, not the most threatening spinner in the game, and certainly no turner like a Warne or Murali, offers ample evidence that the West Indians struggle when the deliveries aren’t offered in their six-hitting range or slot.

Do they need to make technical adjustments to the game, like using the depth of the crease, something the likes of Darren Bravo and Nicholas Pooran are really adept at doing?

To conclude, the pitfalls said, the only shining star with the bat has been Evin Lewis, whose 71 shone brightly in the eight-wicket win that put the team on top before the Windies committed shot-selection harakiri to shoot themselves in the foot.

There cannot be a greater occasion for the batting to click together than what the fourth T20 offers, which is just a few hours away.

And there cannot be a better way to collect some great T20 form ahead of the World Cup than by winning this series, a prospect that actually offers more pressure than excitement given where the hosts find themselves currently.