Who Will Be Axed As India Likely To Tweak Starting XI At Lord’s? 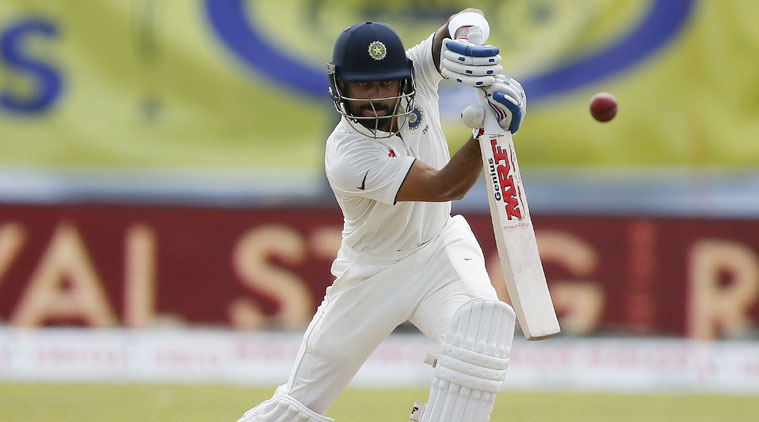 All Eyes will be on Virat as India look to level the series (Image: Indianexpress)

India and England face each other in the second Test match at Lord’s starting from Thursday. The Virat Kohli-led visiting side suffered a 31-run loss at Edgbaston. Besides Kohli, no Indian batsman rose up to the occasion. Kohli mustered 200 out of the 436 runs India managed over two innings, showing what differentiates the skipper from his allies.

Going into the game at Lord’s, India need to address certain key issues and that is in their batting solely. With the bowlers coming in and blazing all guns, it’s time that the batsmen show their character and apply themselves as an unit.

Kohli was absolutely right that the batsmen need to look at the mirror and question themselves and it remains to be seen what homework has been applied here. Given Kohli’s history of changing the playing XI in Test matches he has captained, one of these batsmen is likely to make way.

Here we analyse what could be the possible scenario.

Vijay, Dhawan need to be backed

Going by the performances in the first Test, India should give their openers another chance. The duo of Shikhar Dhawan and Murali Vijay had added 50+ runs for the first wicket in the 1st innings. This shows that there is hope.

Vijay was trapped LBW in both innings and Dhawan’s footwork did him in. What the Indian think tank needs is that the players should work on these issues and come back with a clearer head. Application is the key here.

Vijay has got runs in England back in 2014 and this Lord’s Test is a big chance for him to show why he deserves a place and that he should be untouchable as far as his position in concerned.

In all likelihood, they will turn up at Lord’s and look to have a crack at England once again.

Rahul set to continue at number 3

KL Rahul played a reckless shot in the first innings and then got out off a brilliant delivery by Ben Stokes for 13 in the 2nd innings. Rahul has been one of India’s in-form batsman this season and given he is one of the brightest prospects, he is likely to be given another go.

The Indian management trusts the player and want to see him prosper in all three formats. He has shown his capabilities in limited-overs, but now is that moment of need where he has to show his attributes against the red ball. Rahul could retain his number 3 position as he is a better prospect in the top order.

This Test in many sense is crucial for India’s top order to come in and speak for themselves. Indian fans will hope that happens in the 3rd Test.

So Rahane the person to get the cull?

Ajinkya Rahane is having a dismal run in Tests since the series against Sri Lanka at home in November 2017. He was dropped for the 1st two Tests against South Africa earlier this year, but returned back in the 3rd. Apart from a 46, he did not do anything since then.

There was a chance to be amongst the runs against Afghanistan at home, but Rahane even struggled in the one-off Test in a 20-ball stay at the crease. In the first Test at Edgbaston, the issues for him continued. During both innings he played a nothing shot and threw his wicket away at pivotal circumstances. Perhaps a man lacking in confidence and motivation at the moment.

For Rahane the association of being the best outside the subcontinent is now a thing of the past. He needs to prove otherwise. Not managing a single fifty since November 2017, indicates that he is the likely candidate to get the cull and be benched.

Pujara in for Rahane a likely circumstance

There’s nothing much to separate the two right-handed batsmen. Both of them are struggling at the moment and one feels may be it’s a matter of time before they click. Earlier, the likes of legends Sachin Tendulkar, VVS Laxman and Rahul Dravid did have these phase, but they got their act sorted quickly.

In that aspect, the duo aren’t in a similar zone and it highlights the gap that exists from their predecessors. As mentioned above, Kohli has the knack of changing his side in every Test, and that could see Pujara making a return to the side.

If that happens then Rahane will be benched and made to wait. Pujara could be tried at number 5. He needs to be protected from the onslaught early on and perhaps batting alongside Kohli, will serve him a world of good. With his ability to defend and tire out bowlers, Pujara stakes a claim if Kohli continues to tweak the XI.