Liverpool are set to sell their highly-rated academy product before the transfer window slams shut next Monday. 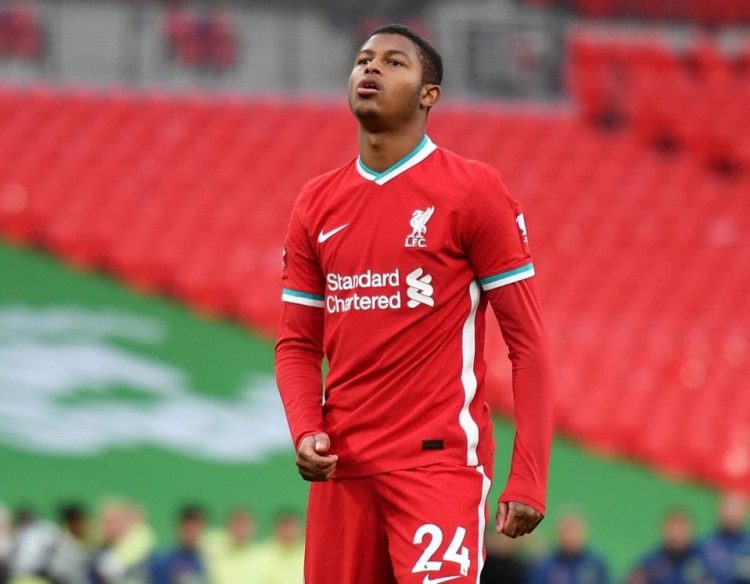 Liverpool are likely to sell Rhian Brewster in the next few days. (Image Credits: Twitter)

Rhian Brewster is considered as one of the best young talents to come out of the Liverpool academy in years. The young forward, who dazzled when England won the 2017 Under-17 World Cup in India, has been long been tipped to make the grade at Anfield.

He spent the second half of last season on loan at Swansea and netted 11 times in 22 appearances for the Championship outfit.

The youngster was expected to kick on at Liverpool this season with more first-team opportunities or was likely to go out on loan to another Premier League club.

When the first reports of Liverpool considering selling the 20-year-old emerged, it caught many by surprise. Jurgen Klopp calls him a natural finisher and often insists, ‘he is our kid’.

However, it is getting increasingly likely that the Reds will sell the player with Crystal Palace and Sheffield United believed to be the leading contenders to land him.

Rhian Brewster has long been tipped to become the next striker after Michael Owen to emerge from the club’s academy and make a name for himself in the first team.

At the start of the window, the striker himself saw his long-term future at Anfield. But in the next six days, he is expected to complete a permanent transfer to another club in the Premier League.

Hard to break into the Liverpool front three

The front three of Mohamed Salah, Sadio Mane, and Roberto Firmino have been the architects of Liverpool winning the Champions League and the Premier League in the last two seasons. They are possibly the most feared strike force in European football and they are not going anywhere any time soon.

Mane and Salah have shown no signs of slowing down this season and while Liverpool could do with a more prolific number 9 than Firmino, the Brazilian is essential to what the Reds do on the pitch as a unit.

Jurgen Klopp had no qualms about ending his interest in Timo Werner after it became clear that money was going to be tight for the Reds in the ongoing transfer window.

Diogo Jota has been signed but he is a squad option. Liverpool will not be bringing in another striker as it is hard to disrupt or break into the front three.

Rhian Brewster is 20 and the young striker needs to play regular football, which is unlikely to happen if he stays at Liverpool. A loan deal could have been an option but the clubs who are in talks with Liverpool want him on a permanent deal.

And the Reds are prepared to sell him and are believed to be eyeing a fee in the region of £20m.

Now for the money……

Rhian Brewster was not one of the players Liverpool wanted to sell at the start of the window. However, they did plan to shift out a few stars and had planned to bring in significant funds from those sales.

But all those plans went from a toss once the bottom line of clubs were hit by COVID. Revenue streams dried up at some of the biggest clubs in Europe and it has become far more difficult to sell players who are on the fringes of the first-team squad.

Liverpool are planning to sell Harry Wilson, Marko Grujic and Xherdan Shaqiri before next Monday’s deadline. They were originally planning to bring in around £60m from their departures but at the moment they have received concrete offers for him and would be lucky to get half of that money.

Liverpool’s finances have been hit as well by COVID and they need the money from player sales. Rhian Brewster has emerged as a way to bring in some money and he has attracted the interest from several clubs.

Unlike the trio of Wilson, Grujic and Shaqiri, Brewster is actually wanted by several clubs and Liverpool will get the price they want despite the market situation.

While there is some football sense to let him go, the decision to sell Rhian Brewster will largely be an economic one with an eye on the bottom line of the club.

Also Read: Daniel James deserves another season to prove himself at Manchester United