The brave little batter Shafali Verma punished English bowlers on her way to a cracking 96! 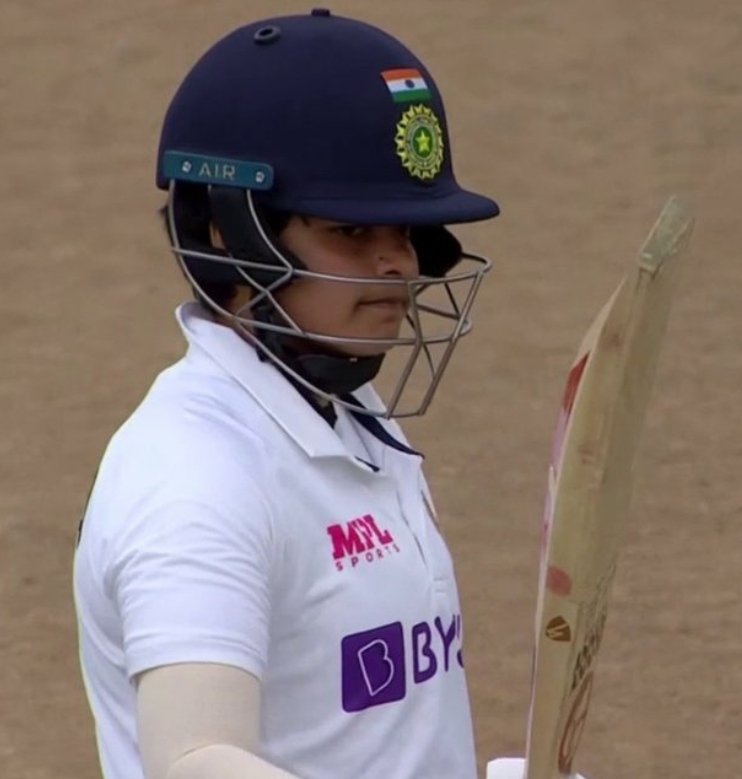 Fundamentally speaking, there’s no big deal if you score a 96, except the fact that you end up missing on a milestone rather revered in cricket- the century! Everyone scores a 96 in their lives. Everyone, at least, at some juncture in their cricketing journey ends up on a 90-something knock. In the nineties up until the 2000s, a famous question in the annals of Indian cricket was- “How many times has Sachin been dismissed in the 90s!?” The answer is 10 times in Tests and 17 times in the ODIs. Rahul Dravid himself got out on a 95 on Test debut. So it’s nothing abnormal as such, you’d note.

But there’s something miraculous if you end up on a 96, in your very first Test appearance, without having ever faced an English bowler in Test Cricket; an effort in the process of which you help compile a 167-run stand. A partnership which becomes the highest record opening stand in the women’s game for Team India.

There’s something absolutely devastating if you score a quick fire 96 against an attack featuring the great Katherine Brunt, Nat Sciver, Heather Knight, and Anya Shrubsole. A quartet of greats in the game that can challenge any attack, whether it’s a Stafanie-Dottin pair or a Lanning-Perry partnership or even a Devine-Bates stand.

And moreover, there’s something absolutely magical and crazy if you end up scoring 96 runs for the first time you wield a cricket bat in Test cricket aged just 17.

Let that sink in.

Just when England thought in the triumvirate of Mithali Raj, Harmanpreet Kaur and Smriti Mandhana, they were up against an audacious batting line-up, in came Shafali Verma as the iceberg that sank the English bowlers.

How her knock justifies being labeled a quick fire inning is that it came off just 152 minute stay at the crease in this one-off Test.

Should there even be a speck of rain at Bristol, of which chances are very remote or any kind of interruption that sees us no more of Shafali Verma bat in the Test, it would be a travesty of magnanimous proportions.

Ever since the Rohtak-born right-handed belligerent striker of the ball arrived onto the scene, there’s been an air of unpredictability that spikes the viewers’ adrenaline.

She’s not even a woman yet.

At an age where she’s not even legally permitted to drive, let alone sip an occasional glass of wine, this self-confessed Sachin Tendulkar fan played an inning of such bright confidence at Bristol that may even have chuffed the little master somewhat.

Unafraid to dance down the track to the English seamers- an attack that also featured the dangerous Kate Cross and spectacularly carefree in exploring the aerial route, whether over cover or beyond mid-wicket, Shafali Verma’s 96 was an inning that carried weight as well as intent.

Of those many runs, 64 came only by way of hits to the fence, including 2 sixes.

At Tea, on Day 2, the Mandhana-Verma pair took India to a position of consolidation, the score at 63-for-naught.

Then, together, the pair batted out nearly 49 overs before Shafali, clearly aware of how close she was at getting her maiden Test century, skied an easy catch to mid-off.

But by then the damage had been done. In stark contrast to Smriti Mandhana’s 215-minute-stay at the wicket, which resulted in 78 useful runs, Shafali Verma’s approach was carefree, fluent and dynamic in equal measure.

Someone had to go out there and pinch her to believe-it almost felt- that she was playing her first-ever Test inning. Her confidence at defending, pulling, cutting and even leaving the occasional ball away from the off stump was unreal; everything about the right-hander signalled she’s made for big things in Test match cricket.

Way back in time, Chanderkanta Kaul had scored a 75 on Test debut, which prior to June 17, remained the highest-individual Test score by an Indian debutant. But today, it was broken by a cricketer both young in age but brave in mindset.

In Shafali Verma, India have found a fearless stroke maker who’ll go for her shots, much like a Sehwag, Hayden or Lara did.

But at the same time, in Shafali Verma, England have found a great nadir that must be kept quiet unless a very highly regarded English attack fails to contain a pair that has already given the idea that India aren’t here to merely compete; but rub shoulders with bravado with a team that is one of the best in the international women’s game.

The good news for now is- Verma is back in the dugout as her team are at 187 for the loss of 5. But the bad news, for England, however, is- she’s got another crack with the bat left in the Test match, a contest which is far from over!