World Cup 2019: How Australia’s ‘Fab Four’ Are Dictating The Show?

The Australian cricket team has so far has lived up to expectations in the ongoing ICC World Cup 2019. The Aaron Finch-led side has 10 points from six games and is on course for a place in the last four.
Australia’s biggest test lies on Tuesday against hosts England, but one backs them to offer a big fight in this marquee battle. This World Cup has been a tournament for the Aussies, where they have been dependent on the ‘Fab Four’.
One always predicted that these four stars – Finch, David Warner, Steve Smith and Mitchell Starc, will be crucial for the side. So far, things are looking true for the Men in Yellow.
It is the spark that is associated with these core players, who have made winning a habit. They are the big guns, who do not shy away from the major responsibilities.
Credit goes to the others for rallying around these four match-winners. Australia have been producing the substance with both bat and ball. Finch and Warner have been excellent in providing dream starts (five fifty-plus stands in six matches).
Someone like a Smith, who has been overshadowed by the two, has helped his side win massive encounters. And then you have the ever reliable Starc, who has so far been the best bowler in World Cup 2019, alongside Jofra Archer.
Finch knows what to expect from himself and these three and they all fit into their roles so perfectly.
Australia still have some work to do especially in that middle order, but they have the desired strength to go all the way. Here we decode how Australia’s ‘Fab Four’ are dictating the show in 2019 World Cup.

Since returning from his 12-month ban for ball-tampering, Warner was always going to be the cynosure of all eyes.
The celebrated cricketer stamped his authority in the 12th edition of the Indian Premier League. He won the prestigious Orange Cap. The confidence earned from IPL gave Warner the license to do well in CWC 19.
He has been batting in a different level altogether. Against Bangladesh on Thursday, the southpaw amassed a brilliant 166 to break many records.
He batted with a certain sense of calmness, before going wild post his hundred. This is Warner 2.0 at his best. He is willing to take time early on and once set, he can then attack as per the demands.
Warner was criticised early on for being laborious with his approach. The strike-rate was below hundred and he looked stuck to the crease.
But despite that, he scored runs. What that did was it helped him spend time at the crease. This is now paying off for Warner, who is the highest run-scorer in the ongoing World Cup (447). He has two hundreds and three fifties under his belt.
His 166 is also the highest score by a batsman in CWC 19. If Warner continues in the same manner, then Aussies will be in for a treat. He is a prolific run-scorer, who sets the bar high.

Aaron Finch has led from the front

The role of Finch in CWC 19 has been remarkable so far. The Aussie skipper has been impressive as a captain. He’s been bold and the decision-making on the field has seen significant improvement. He has attacked with his best bowlers whenever his side faced a threat from the opposition. The team has backed his leadership skills.
Finch has looked assured with the bat upfront and the aggression, which identifies his approach, has stayed true. The senior cricketer, like Warner, has scored heavily (396 runs). Two have both the openers dictating the show so well, the confidence then augurs well in the side. Finch has been at his sublime best in 2019.
He became the first batsman to surpass the 1,000-run mark this year in ODIs. The understanding with Warner has been the biggest strength. The two have been the most successful opening pair in the ongoing 2019 World Cup, Finch’s application and temperament has allowed someone like Warner to play more freely. His 153 against Pakistan was an absolute delight.

Starc has been Australia’s match-winner

Starc has been the go to bowler for the Aussies. The left-arm pacer has already bagged 15 scalps in CWC 19 and is the joint-highest wicket-taker alongside Archer.
The 2015 World Cup hero has stayed true to his potential. In 2015, Starc bagged 22 scalps to help Australia win the World Cup. In 2019, we are seeing a dangerous Starc making inroads.
Starc in almost every game has been the most effective bowler just when batsmen from the opponent teams have looked to settle down.
Be it against the Windies, Pakistan and then against Bangladesh, the premier fast bowler came back to dismiss the set batsmen. He has bowled well with pace on offer and he looks absolutely fit.
Starc, who suffered his tryst with injuries, was raring to make a comeback in the side and perhaps stay fit. That box has been ticked and now the results are coming.
He has hardly given batsmen the space to work from. The lethal bowler surpassed Brett Lee (35 wickets) to become the second most successful bowler in World Cup history for Australia.
He also became the fastest to 150 scalps in  ODI cricket early on in CWC 19.

Steve Smith has found his feet 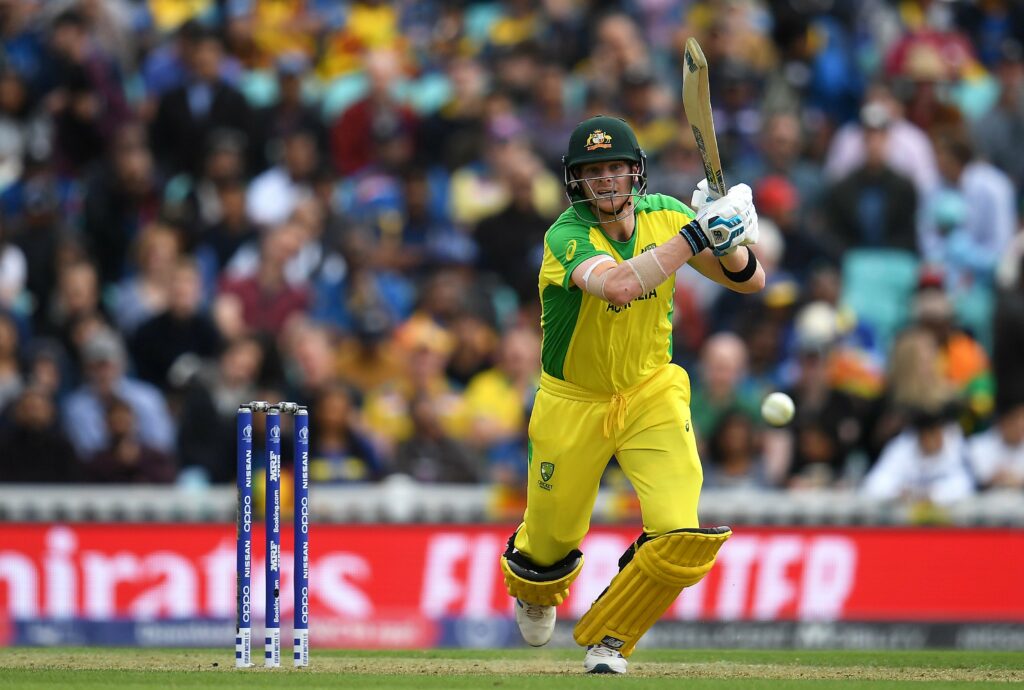 Steve Smith’s return to the side was always going to be of interest to one and all just like Warner’s.
The former Aussie skipper come into the World Cup after scoring heavily in the warm-up games. Smith came in and found his feet. He is a busy customer and the strike rotation has been brilliant.
The same was highlighted by Finch after the spectacular win against Sri Lanka. Smith’s best moment came against West Indies, where he hit a match-winning 73.
When the chips were down, Smith stood out and batted like a hawk at the crease. He stitched a major partnership with Nathan Coulter-Nile and saw Australia post an impressive score.
Then against India and Sri Lanka, he put in the shift as well to score impressive fifties.
The right-handed batsman has taken the burden in that background. He hasn’t decimated the bowling attacks, but played as a base to build upon. Smith has a major role to play in the upcoming matches for the Aussies and his versatility is something the side will be looking upon.
If Australia are to win the 2019 World Cup, then these four stars will be the light to guide them.

Previous articleIs The Dropping Of Mission Winnow A Setback for Ferrari?
Next articleLet’s Not Undermine Valtteri Bottas For The French Grand Prix