Jofra Archer made his international debut in May 2019. The 24-year-old fast bowler was identified as someone who could have maximum influence in England’s journey at the ICC World Cup 2019. Archer with some T20 pedigree and experience under his belt, settled in at rather a fast pace. His promise ensured that England called him up for the World Cup squad.
Archer’s influence and promise was such as England knew it that he could be their main man in the coveted 50-over World Cup. There was that element of trust placed in him within a short span of time. Come the end of the World Cup which England won after defeating New Zealand, Archer turned out to be the hero.
He stepped up to bowl the Super Over after the match was tied and helped England breathe ahead after that too ended on a stalemate. Archer needed to defend 16 runs in a high-pressure context of the game. At 24 years of age, he was featuring in the biggest moment of his life. He charged in and kept his nerves. New Zealand tied the Super Over and England won the match in courtesy of more boundaries hit in the match.
“I was pretty sure I was going to bowl it [the super over]. My heart is still racing! It’s the biggest thing I’ve ever won. A great bunch of fellas, a really good family to me,” said the youngster, who showed that he isn’t afraid of the big stage and is ready to accept anything that comes on his way. This is a hallmark of a champion.
World Cup winner Archer has become England’s poster boy in such as short span of time. Here we decode the reason why.

Archer’s desire and ability needs to be lauded

The 24-year-old right-arm pacer is someone who has great ability and desire. He looks as someone who is born to excel and have a successful career for the Three Lions. He has that added attribute of stepping up and producing substance in pressure games. Not just the final, but he was looking forward to the semis as well. England had beat Australia in the semis.
As Archer said that he knew it he will bowl the Super Over. And he held his nerves. For a moment we all thought that perhaps England could have gone in with an experienced name to bowl in that situation. But that’s skipper Eoin Morgan’s ability to lay trust and vision on the youngster. Morgan gives you the freedom to go out and excel.
The skipper allows a player to fail and backs him consistently. This great leadership attribute helped Archer to get that extra bit in his bowling acumen. Archer looked like someone who is ready. Someone who wants to get up and say, Yes. I’m here!

Archer is someone who has drawn comparisons with legend Glenn McGrath. Like the Aussie, he often relies on bowling tight. He hardly gives you the space to work your way through. But he has an added advantage – pace. Archer comes in and bowls from tight angles into the stumps. He is effectively consistent with his pace and lengths.
His biggest positive is to be calm, patient and tease a batsman with great pace. He can bowl consistently over 145 kph. The range of deliveries are vast. Archer can mix things with slower bouncers and cutters. Has an excellent slower ball range. The Jamaican-born player can bowl anytime in a game.
Another quality of him is his ability to extract swing. He looks like someone who has played years of international cricket. He looks very relaxed at the age of 24. In the semis, he perfectly executed the first ball against David Warner. And then in the final., he continued to bowl in a similar range. Archer looks like someone who is matured at the age of just 24.

Archer leads from the front to excel in 2019 World Cup 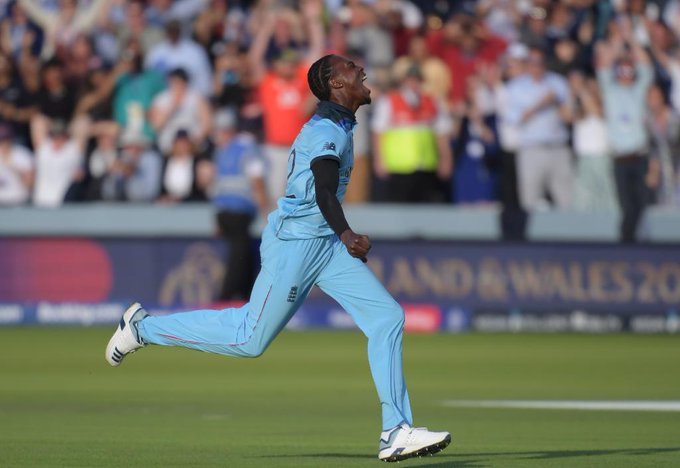 The speedster was England’s best bowler in the ICC World Cup 2019. He ended up with 20 wickets in his bag. This is the most by an Englishman in an edition of the
. Archer also bowled the most overs in the 2019 World Cup. This shows the level of trust inlaid on him by skipper Morgan. What Archer managed to do was stand up and prove that the risk taken on him by giving him a chance made amends.
His wide range of skill set at such a young age separates him from the rest. What tops the billing is that he is also a quick learner. He is ready to make his presence felt in the biggest stage. He was superb to watch throughout the tourney. One factor that helped Archer was his experience gained from T20 cricket. This helped him massively.
He got that big opportunity to learn from these franchise T20 leagues. Here he got to rub shoulders with the biggest cricketers across the globe. That’s where things worked out for him. Also, credit to England for welcoming him with open arms and making him feel at home in such a quick span of time.
There are talks that Archer is in prime contention to be considered for the Ashes. One is excited to see him bowl with the red cherry in his hand. He deserves every bit of love and recognition. He played a massive role in helping England win the World Cup.